Review- One Moment by Kristina McBride. 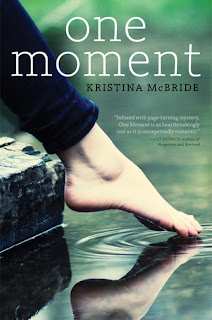 One Moment by Kristina McBride.

Firstly, kind thanks to the publishers, for granting me the permission to review this book via Netgalley, for no charge, for an honest review.  This book was read on my kindle.

This was supposed to be the best summer of Maggie's life. Now it's the one she'd do anything to forget.Maggie remembers hanging out at the gorge with her closest friends after a blowout party. She remembers climbing the trail with her perfect boyfriend, Joey. She remembers that last kiss, soft, lingering, and meant to reassure her. So why can't she remember what happened in the moment before they were supposed to dive? Why was she left cowering at the top of the cliff, while Joey floated in the water below-dead? As Maggie's memories return in snatches, nothing seems to make sense. Why was Joey acting so strangely at the party? Where did he go after taking her home? And if Joey was keeping these secrets, what else was he hiding? The latest novel from the author of "The Tension of Opposites," "One Moment" is a mysterious, searing look at how an instant can change everything you believe about the world around you.

The cover drew me in because even something so simple can be immense.  The colours, the brightness on the foot as a focus with the reflection, the tipping the toe with the reflection ripple it makes, and as though they are unsure, testing the water, nervous about the water.  This is just some examples it brings to mind.  After reading the book you realise this is a perfect cover and it has got an eerie feel about it.

So, yes, i enjoyed the book, i am not going into the book description as it is mentioned above and i don't want to risk plot spoilers.  If i do, i apologise in advance but there shouldn't be any.  Throughout the book i was hooked, completey engrossed in the story and it was full of suspense (which went on for a long time!); i wanted to know what had happened at the gorge at the top of the rock, what was all the little whispers going on and what exactly had occured previously.  The book is done so that the 2 characters;Joey and Maggie (an item) go to the top of the gorge and are just about to jump.  From then it skips to after when something has happened, an accident.  It comes together with what had happened bit by bit BUT there is a big part missing which is in Maggie's memory, she cannot recall this.  Whilst having this suspense and bits of information added and then more 'whispers/secrets' becoming revealled, it is intense!

It is also really sad and emotive, you really feel for Maggie and it feels so real, probably because it is narratored by her, therefore it is seen through her eyes as such and told with her words  The author has written this beautifully to evoke these feelings in a reader.  This has being done through having such descriptive writing, so that instead of telling the reader what to see, hear, feel and smell; she does it with descriptions so that your senses put the imagery together.  Through this, it enables human nature to be explored, to demonstrate how a friendship can be effected by a death.  In fact, the emotions and expressions portray this perfectly in my opinion. Very clever! and what really adds something too the book is how the information is revealed bit by bit and not just given all at once it keeps the reader guessing, yet, a lot of it is quite predictable to be fair.

It all sounds great, however, the story didn't start coming together until around 60%, and that 1st part could have being condensed into much much less.  It honestly felt like the last part of the book was written as the book was meant to be and the 1st part had words added to them to make up a word count or something.  This was done in the descriptive parts because i honestly felt like it had been 'padded out', it was VERY descriptive in parts, as in over the top (OTT)- all fluffiness and colours.  An example is when they are at a party, and all the colours she mentiones in the sky and them mixing etc.  Just too much and not needed really.  Descriptive wrting, as i said in the above paragraph is fantastic, but there is a fine line between this and OTT and in parts, this book definitely was OTT .  It felt quite slow-paced and i just wanted to get on with it, once we got to that point then it was quite good paced.  Due to the slow pace, it gave the reader more time to put things together and ultimately it becomes quite predictable.  Another little issue i had was how it was told, each chapter was a jump between timeframes, some where before the jump,some the day of the jump and some after the jump and present day, it doesn't give any dates or say on the chapter which it was going to be.  I found it really confusing sometimes and it took me a bit to work it out.  That bit of guidance would have made a difference, because this way of 'telling a story' is actually much better as a novel as it gives a deeper understanding into issue and how the past can effect the present.  Shame really or maybe i am the only one who got confused.


There are several characters but the main ones in my opinions are Maggie (story narratored by) Joey, Adam and Shannon.  I didn't take to Maggie at all, i don't know why, i just didn't, i thought she was quite naive (you will understand when the book is read) and even though she was 'heartbroken' she quickly moved on with life!  I didn't take to Joey either, he made me angry!, i felt he loved himself and was big headed!  For some reason i didn't trust him from the beginning, however, i did mellow towards has the story unfolded and you get the truth of his life, i felt sorry for him in ways. Maggie forgave him and what she did near the end was quite sweet and i think this ending was to make the reader like him and forgive him too.  Shannon is another character i didn't trust, i felt she was the show off in the group. This is demonstrated when they are on the beach at the gorge, she is a big mouth! She is just a b!tch really, however, we are told that she is within the text, in the exact phase of calling her that name.  Therefore, as a reader, even though we are judging her character, this also leads us to not like her.  She is not a loyal friend, but she does have a heart, she just keeps it well hidden.  Adam is Joey's best friend, he struggles immensely after Joey's death and because he has so much information in his hands, he is in a real dilemma whereby he pushes his friends away.  Readers could dislike him because of this and all the unnecessary drama around him, however, i didn't, i felt sorry for him because he needed help, he was hurting, he didn't know what to do with all the secrets and information he has.  Thankfully, he deals with the situations and the end is quite fitting and sweet with him.  It feels like it was a quick move after Joey's death, but given what had occurred, it felt right.

Finally, the story had a proper ending, it was closed and all the bits of the story where brought together with nothing left outstanding or any questions needing answers.  Like i said previously, i liked the story and enjoyed it.  However, i didn't love it and the issues i had with it is why i gave it a rating of 3 out of 5.  I feel like i am being stringent but it feels right.