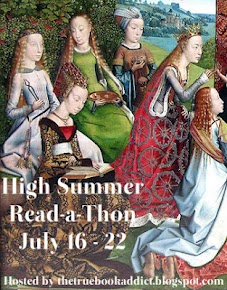 Just an explanation post really for those who knew i was doing the #HSreadathon
Unfortunately i wasn't able to fully participate in this readathon and around day 4-5 i decided that i wasn't going to be continuing with the readathon. I had read less than 40% of one book by then, which, for me, during a readathon was poor.  I didn't give it my all, and i didn't read when i could have, i just wasn't in the mood.  I knew people where giving it their all or at least trying their best and i know i wasn't.

I know what lead to the failure and it was a combination of several things.  Firstly, i had a busy week with hospital appts-ones which were hours long. I did think that when i went into hospital for my IV infusion, i could read for the 2hr duration, but i was so tired this week that i slept from 5minutes in!  I was ill on the monday to kick off and was exhausted for the rest of the week resulting in lots of sleeping.  I found that my heart wasn't into reading, the book i was reading was hard going and even though i was enjoying it, i was pressuring myself.  Once i decided, enough is enough and unfortunately this is a readathon i will have to bow out of, i felt such a relief.  I had opted in at the last minute, i hadn't planned for a readathon and had blog posts to wrote and comments to catch up for, all stuff i was getting behind on my blog.  I think to do a readathon properly, i need to gear myself up in advance and have a virtually clean sheet ahead, with no blogging plans.  I do feel like i have let myself down and that i have failed BUT onwards and upwards! I will do more readathons in the near future.
Sorry i felt like i needed to explain.