I entered a giveaway on 'Goodreads' that was ran by Leigh, who is an author who lives in NZ. I was thrilled to pieces when i won a copy of the book 'Crush' and since Leigh is SO kind, she included a copy of her 1st book (self published) called 'Beauty'.  I am definitely adding these books to my TBR pile!!! Here is a little summary of both books.

When Philippa Ballantyne is knocked off her feet while dog-walking, she is rescued by a a knight in steel-toed boots - Ben. A handsome bee-keeper and firefighter who smells delectably of honey - who could resist him? But Philippa has recently moved back to her hometown, Glory Falls, and it seems like the past is waiting for her around every corner. She can't forget Cam, her crush, who she's adored since she was eleven years old. When Philippa hears he might be returning to Glory Falls she is excited - and scared. Should she give up someone ... perfectly good ... to follow an impossible dream?
Her friends Gill and Sean rally around, but things aren't easy for them either. Sean is finding out just how hard it is to be gay in a small town - especially when random prejudice turns into a series of sinister attacks - and Gill is trying to revive her foundering marriage. But will one more erotic adventure save or destroy her relationship? Glory Falls is a small town with a dark heart and Philippa, Gill and Sean are about to find out just how dark it can get.

It's easier to be happy when you don't know what's going on behind the scenes. There's a reason it's called blissful ignorance ...

Mena joins a luxury motor yacht in the Mediterranean, enticed by rumours of the fast-paced, highly paid crew lifestyle. Shocked to uncover the literally sick secrets of yachting's achingly slim women and shattered by the reality of life onboard, Mena soon discovers that yachting's glamorous image is merely an illusion. During a cruise around the Balearic Islands, Mena and the yacht's crew and guests battle with illicit affairs, closet addictions and the pressure of maintaining a slender waistline. Enter a world where the quest for the body beautiful surpasses everything and nothing is as it seems.
A novel that takes a daring look at bulimia from behind closed bathroom doors, Beauty will make readers think twice about the grim reality lurking behind today's size-zero phenomenon, while shedding light on the sleep-deprived, often drug-fuelled existence of yacht crew. 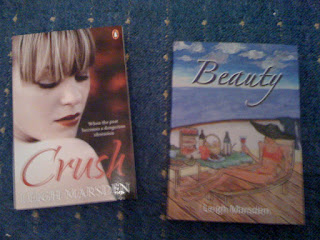 Thanks again to Leigh :)
The books will be reviewed on Goodreads when finished.