MY REVIEW- The Statistical Probability of Love at First Sight 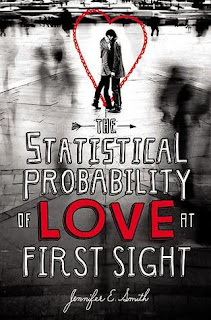 The Statistical Probability of Love at First Sight.
by Jennifer E. Smith.

I purchased this book myself and it is a hardback book.

"Who would have guessed that four minutes could change everything?"

Today should be one of the worst days of seventeen-year-old Hadley Sullivan’s life. She’s stuck at JFK, late to her father’s second wedding, which is taking place in London and involves a soon to be step-mother that Hadley’s never even met. Then she meets the perfect boy in the airport’s cramped waiting area. His name is Oliver, he’s British, and he’s in seat 18C. Hadley’s in 18A.

I purchased this book in hardback version and i have decided to do a review on it even though there are so many reviews out there and mine will more than likely add nothing to what has already been covered.  However, my review is for me and I'm not doing reviews to change anything or to really add anything, it is for my record.  First of all I LOVE THIS COVER!!  It pulls you in for a romance story without all the normal 'fluffiness' and 'girliness' that a lot of romantic novels use.  You know the type with hearts, swirls, pinks/purples, swirly writing, happy pictures etc.  This could be even a crime cover if it wasn't for the heart, and the title. Just like an airport CCTV, of the two characters 'Hadley and Oliver' kissing. Just love it. The title, when you realise why it is used later in the book, i melted! I smiled and i swooned.  We all somewhere wonder if love at first sight happens, this is another pull of this book, i think we like to think it does happen.

I have to say i had high expectations for this book because i had read so many incredible things about it.  First off i have to say that i was not disappointed at all!! I enjoyed every minute of this book and i wanted more and more, it wasn't long enough for me.  It was the right pacing too, not too slow or fast and covers so much in a 24 hour period.  That is what the book was in time, 24 hours.  I loved this book because i'm a secret hopeless romantic and i do believe in love at first sight, i do believe in fate and that everything happens for a reason.  However, in books i'm not for the whole instant love in one page and marriage,babies,house etc etc on the next if you know what i mean. I like things to linger a little, the suspense of the romance that is so clearly there.  This book in terms of romance is obviously about Hadley and Oliver, but it is more than that, it is about other relationships. The main other being Hadley and her relationship with her dad, which is none existent before she flies to England- the progression of that is another heart-warmer.  She is flying to England to attend his wedding to 'the other woman'.  Hadley is a teenager who has gone through the divorce from her parents and is obviously bitter and full of anger, so the thought that Oliver is able to thaw her heart is so sweet.  Oliver is travelling to England for reasons he doesn't explain.  Would you believe it that after meeting in the airport, they have plane tickets for the same row! and end up sitting together! I am not going to go into the full ins and outs of the plot, i don't think a review needs that.  I could not put this book down, it had everything i needed; suspense, excitement, hope, love, tears, sadness, happiness,smiles.  I knew what Hadley was feeling, not so much Oliver, i just wish that it would have being from Hadley's perspective so that you could feel it more, so it was more descriptive in feelings, and so you could get inside her head more.  I think it could have worked if the chapters alternated between Hadley and Oliver, to get a full enhanced romance book. This is just my opinion as these kind of books are my favourite at the moment if written correctly.

These characters are portrayed so beautifully i don't think you could say a bad word about them! I loved Hadley's character, she seemed to be going through so much, had gone through so much and needed some luck.  She must have really dreaded that flight but it turned out to be so different from what she thought.  She is a lovable teenager, just with understandable anger and hurt, you want to take her under your wing and look after her.  She is strong though and knows her own mind, has her own independence.  Oliver, the other main character, i think i fell in love with himself.  He is such a gentleman and romantic too, you can just tell how he likes Hadley, how cute he is.  When you realise things about him in the book, you just think wow, he hid all that to support Hadley.  Why can't more males be like that?  There is an air of mystery about him, but he made me smile and even laugh and cry.  All in those short pages.  I so wish the book wasn't in a third person perspective.