Review-Over you by Emma McLaughlin and Nicola Kraus. 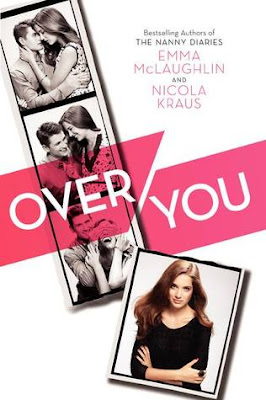 Over You by Emma McLaughlin and Nicola Kraus.

Firstly, kind thanks to the publishers, for granting me the permission to review this book via Edelweiss for no charge, for an honest review.  This book was read on my kindle.

After the grand explosion of her relationship, seventeen-year-old Max Scott developed what every girl in the history of the world has been waiting for: a way to get over being dumped. Now Max is the go-to guru for heartbroken high-school girls all over NYC. But when her ex unexpectedly shows up in her neighborhood, Max’s carefully controlled world starts to unravel. With her clients’ hearts hanging in the balance, Max will have to do the seemingly impossible: get over him once and for all.

Brilliant at bringing humor to the trials and tribulations of the lovestruck, #1 New York Times bestselling authors Emma McLaughlin and Nicola Kraus have crafted a tale that will resonate with any girl who has ever been in love or had her heart broken. It brims with smart observations, features a pitch-perfect teen voice, and will attract fans of Jenny Han, Sarah Mlynowski, and Lauren Barnholdt. Readers are sure to fall head-over-heels for this sharp spin on breaking up, making up, and getting even.

Review.
Many thanks to the publishers for granting me access to review this book, for which it was kindly received via Edelweiss. This was read on my Kindle and the review is of my honest opinion.  When i first saw this book and read the description i was eager to read it!  The cover is pretty amazing and tells a tale in itself, with the black and white photo-booth pics of a couple and then a colour 'picture' (or so it appears) of a girl alone with that title, it makes it look like those booth photos were in the past and now she has moved on in life and is hence 'Over you'.

The cover drew me in because it just looked like a 'chick-lit' and i have to say that i often like an easy going 'chick-lit' with some romance thrown in.  The synopsis wasn't quite what i expected from the cover but then maybe that is due to me making assumptions, however, i was even more interested to read this and intrigued about what was going to happen.  Plus, it is set in New York City (NYC) which i am obsessed with and it's a contemporary YA genre- my favourite! Hence, this sounded perfect!  However, i am sad to say that i was really let-down and don't like it nearly as much as i thought i would, it wasn't due to me having high expectations either, it genuinely isn't a brilliant read in my opinion.

The story follows Max, a high school dropout who has lived her life moving from one place to another, but has now moved to NYC in a hope to attend a NYC college and has set up a business  'Ex Inc' to help teenagers get through a break-up.  This premise sounds great, yet, it is actually unrealistic when you read the story and it would not work, with a few changes i believe the plot would have worked so much better and made a greater read without the reader questioning everything.  Max, goes into these teenagers house while they are in devastation following the break-up, she is a stranger there to help them and gives them the means to get through the night- chocolate, water and pills; she then supports them to get over the boyfriend, leading up to a 'moment' to make them jealous and regret leaving her...to show she has moved on without him.  This sounds great and would be to a teenager who is going through a similar situation because reading this and some 'advice' in it may be applicable to that individual and really make a difference.

Yet, taking medication off a stranger, who would honestly do that? and isn't it a bit weird! and also a stranger coming into your room, i don't understand why they wouldn't freak out.  Plus how is the business even funded, it is non-profit, apparently they live off donations- not disclosed how much! Max steals 'pilfering' or 'borrows' as she views it, this is clothes from Vogue and whatever else she needs. Also, there is other people working for Ex.Inc, how are there wages paid? Max is a high-school dropout, she isn't business minded and she lives where she has set up the 'office'.  What does the stealing teach teenagers? Has i said previously, i really liked the premise but it failed to deliver as expected, with one of the reasons being the unrealistic aspects.  I believe it would have worked out more solid if Max was older with an education behind her, so that she was more grounded and had money!  With a proper business set-up and a different way of helping these girls rather than springing up in their room unannounced.

Unfortunately another problem aspect in my opinion is the writing style and the characters themselves.  The narrative is quite difficult to read, it is a third person perspective from multiple characters.  It seems to be a little messy and occasionally i didn't know which character was speaking.  This jumbled  writing set a tone of the book for me and i found it so difficult to read. It took me weeks to read and actually put me in a reading funk. I wanted to enjoy this book so much and i really did try.  I did enjoy the humour dialogue though and there is some witty and funny moments from Max, as she just wants to please.  A quote (from unfinished edition) i really liked and made me giggle is;

but a quote (from unfinished edition) i really didn't like at all and thought was a horrid metaphor to use is;


".....drags her bag up the stairs like it's full of kittens who've done something to piss her off"

I mean really?? Why would a sentence like that be used, i don't understand what it adds to the story or even what that metaphor adds to demonstrate anything.

Speaking of Taylor, i did like his and Bridget's story, i really took to Bridget and i thought it was a perfect break-up story, i did guess what would happen in the end but i am not sure if it is actually that obvious.  Their story does give the opportunity for some really good speeches which will hit home with some readers.  You really get a sense of 'girl power' and about moving on and growing as an individual.  Max does give this sense as she is ambitious and has a strong character, but she is human and she does doubt herself and has insecurities.

Max is the main character, but i couldn't take to her at all.  In some parts i did really like her but overall i felt disconnected from her, she seems to have little emotion or thoughts.  If it was a first person narrative from Max's perspective instead then i believe the reader would take to her more by learning more about her and how she feels. This unsure feeling started in the beginning of the book as it explained that Max pretended to be different people to fit in as she switched to different schools.  I didn't know if she was fake and as the story progressed, i felt that vibe throughout!  The 'borrowing' (stealing & returning) clothes from Vogue at night and the lies to friends, all added to that feeling.  I didn't feel like there was a very good character development for Max or any of the characters really.  We didn't know enough about her or her personality. Who is the real Max? Who is the fake Max?  A strong character, who has this business to help girls but she is doing everything she tells the girls not too, and has far more insecurities than they do.  It is a shame really.  The secondary characters include; Ben, Zach, Phoebe, Bridget, Taylor and a few others who were brief.  I am not going to go into the other characters because i don't really have anything to say, i really did like Ben, i had a soft spot for him. I wanted to know more about Phoebe too!  I didn't feel there was enough depth to these characters at all.

Overall, there were some good aspects and it was a cute story.  It really would hit home with some readers and the advice within it would be useful, plus if the story wasn't analysed as much and just taken at face value then i think i would have liked it.  I really did want too, but for me the bad outweighed the good, and i was disappointed.  It did contribute to my reading funk which has effected my blogging too, which is unfortunate.  I do recommend that people go to Goodreads and read some other reviews of this book because you might read some of the higher rated reviews and then really want to read the book. I recommend that everyone gives it a go though :) Sorry to say, it's only a 2 out of 5 for me.

Email ThisBlogThis!Share to TwitterShare to FacebookShare to Pinterest
Labels: contemporary, review, romance, YA