(Late)Review-Pushing The Limits by Katie McGarry. 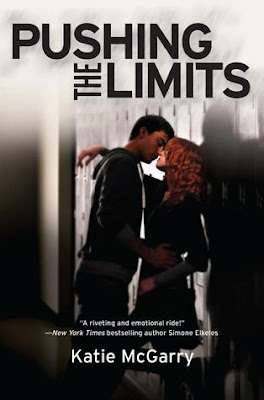 Pushing The Limits by Katie McGarry.

Firstly, kind thanks to the publishers, for granting me the permission to review this book via Netgalley, for no charge, for an honest review.  This book was read on my kindle.

No one knows what happened the night Echo Emerson went from popular girl with jock boyfriend to gossiped-about outsider with "freaky" scars on her arms. Even Echo can't remember the whole truth of that horrible night. All she knows is that she wants everything to go back to normal.But when Noah Hutchins, the smoking-hot, girl-using loner in the black leather jacket, explodes into her life with his tough attitude and surprising understanding, Echo's world shifts in ways she could never have imagined. They should have nothing in common. And with the secrets they both keep, being together is pretty much impossible.

Yet the crazy attraction between them refuses to go away. And Echo has to ask herself just how far they can push the limits and what she'll risk for the one guy who might teach her how to love again.

My Review/thoughts.
Many thanks to the publishers for granting me access to review this book, for which it was kindly received via Netgalley. This was read on my Kindle and the review is of my honest opinion.  This book was actually read at the start of August and i really do apologise for this late post/review.  Therefore, for that reason, rather than a review as such, it is more my thoughts. I know people have read a ton of reviews on this book but i am documenting this for myself on my blog because i read it AND I LOVE IT!

Sorry, i couldn't help myself with that last part of the sentence.  I wanted to read this book as soon as i saw the cover and read the synopsis.  I mean WOW!  I did have high expectations following the amazing reviews i had read on Goodreads & other blogs.  I was not let down, i totally LOVED this book, even that is an understatement in itself! I just cannot express how much i adored this read, it is a page turner and i could not put it down.  When i did put it down, i couldn't stop thinking about it!

The synopsis is on the book (see above) and i do not like to go into that too much incase i give spoilers away.  Firstly, i have to mention the book cover, the one i love is above and this is the hardback version.  There is a paperback version but i believe this is just in the UK and it hasn't got a patch on the hardback one.  The one above fits the two characters; Echo and Noah perfectly (as described in the text), and reflects the relationship between the couple- their closeness, their romance and their love.  It was an instant attraction and i knew it would be my kind of book!

This has to be one of the most emotive books that i have ever read, the feelings that are conveyed by the author through words are felt so strongly that it evoked strong emotions, and i cried a few times!  The writing style is in such a way that as a reader you become enveloped with the character's life, taking on board what they feel.  She doesn't just tell you, the reader, what to feel, she describes everything perfectly so that feeling is actually felt.  I cannot express how emotional, heart-wrenching and soul touching this book is.

The narrative of the book is that of dual perspective from both Echo and Noah, which i prefer as i believe it is more effective at providing an all round viewpoint and adds more depth to the story.  The perspectives are given equally so you don't find yourself wanting more of the other viewpoint.  However, one sticking point for me was that there was no clear cut difference between the perspectives, no paragraph each or headings.  It can change perspective from one sentence to the next, which makes it really confusing at times and i found myself having to re-read parts as i had read it but thought it was the other person's perspective.  I did get used to this narrative style and sometimes it worked perfectly as it just flowed and it became slightly more obvious when the perspectives changed.

The character development is incredible, especially for Echo and Noah.  Echo had experienced a life-changing event, one that was so distressing that she suffered memory loss as a result of post traumatic stress disorder.  However, she is left with physical scars, ones that she is embarrassed about and tries to hide. Obviously, her state of mine is troubled, because not only this, her life has being turned upside down by her brother dying in Afghanistan, having an estranged relationship with her mother and disliking her pregnant step-mother.  This is further compounded by the fact that at school she is now seen as a freak rather than being popular like before and her friends have turned on her.  She is so young to be living a life like this and i really felt for her.  The suspense is kept up about that night and is gradually revealed as Echo remembers information, it is very intriguing trying to work it out beforehand.  She could not have found a better boyfriend than Noah, he gained her trust, made her laugh, made her feel safe and protected, he tried to boost her confidence and get her to see herself how he did.

Noah is also a troubled soul, in foster care following the death of both his parents in a house fire and estranged from his younger brothers whom he wishes to protect and gain custody of.  A very difficult task when he is in high-school, is seen has violence after hitting his foster father when protecting his brother and now only has minimal supervised visits with his siblings.  His love for his brothers is evident and is heart-wrenching, the distress he feels due to being separated from them is so upsetting.  When it is revealed what happened the night his parents died and how the fire started, oh my, i did not see that coming and it knocked me for six....i cried and cried!  Wow, i just wanted to hug Noah and not let him go!  I adored Noah, i would love a partner like him. He made me swoon, especially with the relationship he had with Echo.

The relationship between Echo and Noah was lovely and not the insta-love type thankfully (which i hate!), it started off slowly and developed into a beautiful partnership of love, with the reader feeling every touch, embrace and kiss.  The sexual tension between the two is evident but there is no situation of their relationship going any further.  This relationship is basically two troubled teenagers intertwined together to create something beautiful.  They are the opposite of each other but fit together perfectly.

The other secondary characters, which i will not go into too much detail about, included Beth and Isaiah, who were Noah's friends.  They were amazingly great support for Noah and really looked out for him.  Beth, was really unsure about Echo at first, probably because she didn't want Noah to get hurt again given his situation, but she still stuck by what Noah wanted and did come around to liking Echo.  The sequel to this book, will be from Beth's perspective and i cannot wait!  Other characters include Lilia who is Echo's friend, she wasn't so nice to Echo at first but she changed and became a better person and i love that.  Grace and Luke where an ex friend and boyfriend of Echo's and i hated them, i wanted to punch then, such judgemental and nasty people.  Noah put Luke in his place! ha.  There was also her over-protective/slightly controlling dad and her pregnant step-mother Ashley who she hates!  Another awesome character who played a key part is Mrs Collins, she is the guidance counsellor at school and she knows her stuff, she puts these two together for tutoring purposes and that's where they get to know each other.  She knows exactly how to handle both of them, and does the greatest of things for them, one thing she does for Noah, it really choked me up.

So, overall, this book is AMAZING.  I absolutely loved it! I think it is my favourite book of 2012 so far! and contemporary YA is fast becoming my favourite genre! I recommend this to everyone, you need to read it.  I will definitely read it again in the future but slower so i can take it in more. I will be swooning over Noah for a while more too.  I give this 5 out of 5, even with the narrative issue because it was so great that it outweighed any negatives :)