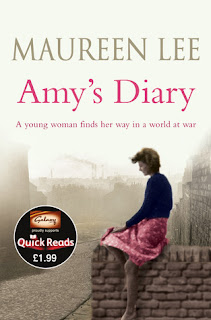 Amy's Diary.
by Maureen Lee.
Paperback
Published by Orion (first published January 1st 2012)
112pages: Quick read.
Book Description.
Set during the Second World War in Liverpool, .
On 3rd September 1939, Amy Browning decided to start writing a diary. It was a momentous day for so many reasons: it was Amy's 18th birthday; her sister had just given birth to a baby boy; and on the radio it was announced that Great Britain was now at war with Germany. For a while, life didn't change very much for Amy. Living with her family in Opal Street, Liverpool, Amy and her friend both got jobs at a factory, and spent their free time looking round the shops, or watching the ships being loaded at the docks. But as the months went by, things began to change. The bombing started, and Amy's fears grew for her brother, fighting in France, and her boyfriend Ian, in the RAF...
-------------------------------------------------------------------------------------------------My Review.
Readers of Maureen Lee would be accustomed to her books set within Liverpool in the war torn eras or eras from post-war times. This book is no different and is set from 1939 to 1944, it is a quick read with approx 112pgs. The font is on the larger side so could have been much more reduced than this. I read this within about 90 minutes.
The book is meant to be undertaken in a diary format but turns into a story as such with 'chapters', no official dates for entries and isn't written in a diary format. It is written in first person but more like a story which fits the chapter-like layout.
The book is read very quickly given the length but covering such a large span of time it feels like so much is missed out. This book could have easily have been made into a longer read with more time spent on life events that occur in the read. There is so much happening in this book and gives an insight into living through the war but because of the lack of depth, there seems to be little emotion and emotive language. The language seems quite basic and at times the author 'skips' explaining 'situations' because of "it's a diary and i do not want people to find this". If this was a diary so much is missing that an individual would include, personal thought at time of entry, questions etc.....not looking back and thinking. It just doesn't feel very personal like a diary would which is a shame really.
But for what it is, it's a nice little read with a loving family and a character 'Amy' you can take too straightaway, just such a shame it's not a full read with more depth
. I've given this 3/5 but i was leading more towards 2/5.
***