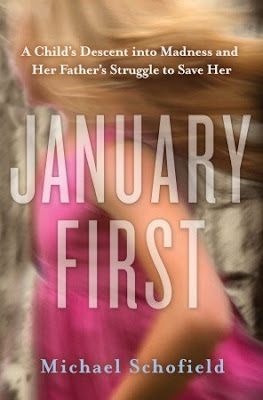 January First; A Child's Descent into Madness and Her Father's Struggle to Save her by Michael Schofield.


Hardcover: 291 pages
Publisher: Crown Publishing Group (NY); 1 edition (7 Aug 2012)
Language: English
ISBN-10: 0307719081
Firstly, kind thanks to the publishers, for granting me the permission to review this book via Netgalley, for no charge, for an honest review.  This book was read on my kindle.

A brilliant and harrowingly honest memoir, January First is the extraordinary story of a father's fight to save his child from an extremely severe case of mental illness in the face of overwhelming adversity.

At six years old, Michael Schofield's daughter, January, was diagnosed with one of the most severe cases of child-onset schizophrenia that doctors had ever seen. In January's case, she is hallucinating 95 percent of the time that she is awake. Potent psychiatric drugs that would level most adults barely faze her. January, "Jani" to her family, has literally hundreds of imaginary friends. They go by names like 400-the-Cat, 100 Degrees, and 24 Hours and live on an island called "Calalini," which she describes as existing "on the border of my world and your world." Some of these friends are good, and some of them, such as 400, are very bad. They tell her to jump off buildings, attack her brother, and scream at strangers.

In the middle of these never-ending delusions, hallucinations, and paroxysms of rage are Jani's parents, who have gone to the ends of the earth to keep both of their children alive and unharmed. They live in separate one-bedroom apartments in order to keep her little brother, Bohdi, safe from his big sister--and wage a daily war against a social system that has all but completely failed them. January First is the story of the daily struggles and challenges they face as they do everything they can to help their daughter while trying to keep their family together. It is the inspiring tale of their resolute determination and faith .

My Review.
This isn't going to be an actual review whereby i give a 'rating', i just think for a memoir, and this kind of memoir especially- it isn't appropriate.  Therefore, i am just going to discuss the book, i will try and include no spoilers.  Many thanks to the publishers for granting me access to review this book, for which it was kindly received via Netgalley. This was read on my Kindle and the review is of my honest opinion.

I was first intrigued by this book because of the cover with a child and the title, but then when i saw the subtitle it clicked!  I had seen a documentary on this little girl, called January a while before and i realised it had to be the same girl with a unique name and this severe mental illness.  I wanted so badly to read more, i was really interested in the documentary and i knew this would be deeper insight.  I am really glad that the little's girl portrait wasn't used on the front, that would not have felt right.  I am not going into the argument of whether it was 'right' for the parents to include her in a documentary or even if it is right to have a book written about her mental illness and their experiences as parents.  It is not appropriate to discuss here.  This book is from her dad's perspective and starts right at the beginning of her life, it includes so many significant events and thoughts he has, it is very detailed at times and the emotion is weaved throughout the book.  What is evident is how much they love their daughter and want the best for her (as any caring parent would).  I believe they made the decision to be in documentaries and to write this book, so that they can tell their story, to tell January's story and to raise awareness.  Awareness of a mental illness so rare in children!  Mental illness is still a taboo subject in my opinion, there are stigmas attached even in modern society and there is little understanding by the general public of how complex mental illnesses are and the effect it has, not just on the individual but also to family life.  This is even more difficult when it comes to children, since mental illness is rare or rarely diagnosed (or should that be misdiagnosed) .

I honestly loved reading this book, i was intrigued about January 'Jani', her story at so young, how the illness developed over the years, the illness itself and how the family managed. I was not disappointed, it was thorough and each of the 'situations' were well described and not drawn out, it kept the reader's interest.  I take my hat off to these parents, what amazing people! Strong, resilient, determined and the most loving of parents!  Throughout the book, i got angry a few times at healthcare professionals, regardless of this 'label' she has, she is a child first and foremost!  Maybe i felt so strong towards the book because i am a mum and because i have experienced mental illness both myself and in my extended family.  I just couldn't put this book down and i needed more and more information.  I don't usually read memoirs but i just had to read this book and i experienced so many emotions- frustration, anger, worry, love, happiness, smiles, sadness, tears- yes i cried, a few times! My heart, thoughts and prayers go out to the family, especially to Jani and to Michael (her dad), he never gave up hope! and he fought for her throughout, and he will continue to do so.  He remained strong and kept the family together. What a man! It is important to note how her mother is equal to this too, it is not just her father that is raising Jani.

Read it people! and recommend it! Please! Awareness really does need to be raised.
I was sad when this book finished because i wanted to know more, as in what is currently happening but since it is up to date almost that is impossible. You can read about January by going onto the internet and searching 'Schizophrenia January'- this would be useful if you do not know anything about her or her family.  I am not giving this book a 'star' rating, for the same reason that i said previous, it doesn't feel right, but i did love it, and would recommend it :)

If you have read it, what did you think?